More
HomeArticlesHow is an Ancient Toilet Evidence for the Bible?
Articles

How is an Ancient Toilet Evidence for the Bible? 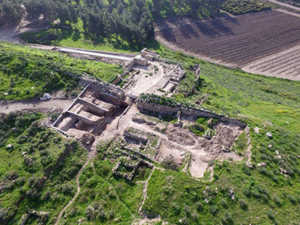 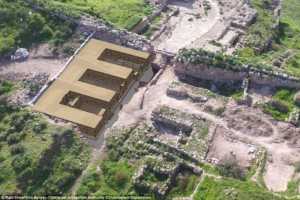 [an artist reconstruction of city gate]

Near this gate was a temple where the inhabitants of Lachish committed idolatry. “Part of this gate complex, the archaeological team found, was a large room that appears to have been a shrine. The room contained two four-horned altars, whose horns had been intentionally damaged, and several ceramic lamps, bowls and stands. Ganor believes that the destroyed altars corroborate Biblical references to King Hezekiah’s reforms: his efforts to centralize worship in Jerusalem and abolish it elsewhere (see 2 Kings 18:4).”4)Robin Ngo, “Ancient Latrine: A Peek into King Hezekiah’s Reforms in the Bible?,” Bible Histroy Dailey, 10-04-2016; http://www.biblicalarchaeology.org/daily/biblical-artifacts/artifacts-and-the-bible/ancient-latrine-king-hezekiahs-reforms/ “In addition to the altar’s horns, a toilet was installed inside the holy of holies as the ultimate form of desecration aimed at stopping idol worship at the shrine. A stone fashioned in the shape of a chair with a hole in its center was found in the corner of the room.”5)Nir Hasson, “Ancient Toilet Reveals the Unique Way the Judeans Fought Idol-worship,” Haaretz, 11-19-2016; http://www.haaretz.com/israel-news/1.744861
The Bible records similar events of when Jehu reformed the northern tribes of Israel after King Ahab, gathering all the prophets of Baal in Samaria and slaying them (2 Kings 10:18-28). The climax of this event records, “And they brake down the image of Baal, and brake down the house of Baal, and made it a draught house unto this day. Thus Jehu destroyed Baal out of Israel.” (2 Kings 10:27-28). The draught house mentioned here is similar to what we would call an outhouse.

Tests at the site showed that while the toilet stone appears to have been installed to desecrate the shrine, it was never actually used.

Archaeologists instead believe it had been placed there symbolically and the inner sanctum of the shrine was sealed shut.6)Richard Gray, “The wrong kind of throne: Toilet discovered at 2,800-year-old shrine reveals Biblical tale of desecration of religious sites by King Hezekiah,” Daily Mail, 9-28-2016; http://www.dailymail.co.uk/sciencetech/article-3811712/The-wrong-kind-throne-Toilet-discovered-2-800-year-old-shrine-reveals-Biblical-tale-desecration-religious-sites-King-Hezekiah.html?ITO=1490&vm=r&s=1

Louis Feldman commented on the word translated “draught house” using instead the word “latrine” in its place.

(The word for “latrine” as it appears in the written text is לְמֹחָראוֹה and signifies a place for a privy. It comes from the stem חֹר “a hole,” and alludes to the orifice from which the solid wastes are excreted. As it is read in the synagogues, the word is לְמוֹצָאוֹת and signifies a place for excretion.) Clearly, making a shrine of another nation’s gods into a latrine would be regarded as insulting, and especially so the remark that it is a latrine until the present day.7)Louis H. Feldman, “Josephus’ Portait of Asa,” Bulletin for Biblical Research, 04:1 (1994), p. 55

The Temple Scroll discovered in the Qumran community’s library shed further light on how the presence of a toilet in this pagan temple is a major desecration of the idol cult. This text from the Dead Sea Scrolls explains that the Jews were told construct outhouses outside of the city of Jerusalem: “You shall make for them latrines outside the city where they shall go out, north-west of the city. These shall be roofed houses with holes in them into which the filth shall go down. It shall be far enough not to be visible from the city, (at) three thousand cubits.”10)Geza Vermes (trans.) The Complete Dead Sea Scrolls in English (Revised Edition), Penguin Books, (2004), p. 207 The purpose of these outhouses being far from the city was to keep the city pure, especially the city of Jerusalem which has the Holy Temple in it. “The city which I will sanctify, causing my name and [my] sanctuar[y] to abide [in it], shall be holy and pure of all impurity with which they can become impure.” (brackets in original)11)Geza Vermes (trans.) The Complete Dead Sea Scrolls in English (Revised Edition), Penguin Books, (2004), p. 207 By installing a toilet in the holy of holies of this pagan temple caused it to be defiled and anyone approaching this temple would become unclean by contact (see Haggai 2:13).

Other interesting facts from ancient archaeology reveals concepts to entertain with theological imports. For example, excavations underneath the Gate of the Essenes (which are mentioned by Josephus in War of the Jews 5.145) revealed “an underground sewage channel emptying into the Gehinnom Valley.”12)Bargil Pixnes, “Mount Zion, Jesus, and Archaeology,” in Jesus and Archaeology, Wm. B. Eerdmans Publishing Co. (Grand Rapids, MI: 2006), p. 311 Bargil Pixnes mentioned:

Knowing raw sewage drained into the Gehinnom Valley in the first century, which was the location that produced the visual for hell to the locals, we can understand why excretions were indicated as part of the punishment in hell. The Babylonian Talmud mentions punishment “in boiling excrement” (b. Gittin 56b-57a)14)as cited in Robert E. Van Voorst, Jesus Outside of the New Testament, Wm. B. Eerdmans Publishing Co. (Grand Rapids, MI: 2000), p. 111. Early Christian apocryphal text such as The Apocalypse of Peter depict women who had abortions as suffering in “gore and filth… as it were a lake… up to the necks…” with others in in a great lake of “blood and mire bubbling… up to the knees[.]” (ApocPet. 25, 30)15)The Apocolypse of Peter, 25, 30; in The Ante-Nicene Fathers, ed. Allan Menzies; 1885-1887, Hendrickson, 1994, Vol. 9, p. 146 Today we view these references as ridiculous, being produced by the over imaginative minds of primitive folks, but there is  clearly a very literal historical precedent implied to these interpretations of hell.

Louis H. Feldman discussed when Jehu desecrated the Baal cult in Samaria from the text from 2 Kings 10 as recorded in Josephus’ witting. He writes, “Josephus has, therefore, deliberately omitted these details and instead retains only the comment that they burnt down the temple of Baal, thus purging Samaria of strange rites (Ant. 9.138).”16)Louis H. Feldman, “Josephus’ Portait of Asa,” Bulletin for Biblical Research, 04:1 (1994), p. 55 Concluding that Josephus avoid commenting this form of desecrating the Baal cult temple “because the non-Jews, comprising most of his audience, might be offended by such a reference”17)Louis H. Feldman, “Josephus’ Portait of Asa,” Bulletin for Biblical Research, 04:1 (1994), p. 55 Pagan Rome was a pluralistic culture. “By modern historians, pagan religion has been defined as essentially a matter of cult acts…. Pagans performed rites but professed no creed or doctrine…. There was also no pagan concept of heresy. To pagans, the Greek word hairesis meant a school of thought, not a false and pernicious doctrine.”18)Robin Lane Fox, Pagans and Christians, Alfred A. Knopf (New York, NY: 1987), p. 31 Romans glorified their “tolerance” and the only times intolerance was acceptable was when a religious claim was made for absolute truth. The pagan persecution of Christians was justified by this idea of tolerance being intolerant against Christ for His words, “I am the way, the truth, and the life: no man cometh unto the Father, but by me” (John 14:6); and His disciples who preached, “Neither is there salvation in any other: for there is none other name under heaven given among men, whereby we must be saved” (Acts 4:12).

We can learn a lot from an ancient toilet if seeking an ethical application today. Christians that have jumped on the bandwagon of postmodernism are thinking like pagans–not Christians. The thought that tolerance means to accept all religions and opinions as equal is not biblical. Truth is absolute and exclusive; not ambiguous and pluralistic. Coming into contact with such idolatrous ideas such as postmodernism should be viewed as desecration and defilement of one’s mind that should be kept pure and holy (Philippians 4:8). How many Christians spend thousands of dollars to be indoctrinated by blasphemous secular universities, send their children to public schools19)see Heath Henning, “Education: A Brief History and Cause of Decadency (Part 4),” https://truthwatchers.com/education-a-brief-history-and-cause-of-decadency-part-4/, or waste hours of precious time being entertained by filthy Hollywood20)see Heath Henning, “The Divination of Disney,” https://truthwatchers.com/the-divination-of-disney/  when they should eschew such pagan influences and flee from it (1 John 5:21). These young “Christians” drink from these cesspools of the world and find no time to be nourished by the milk of God’s word and will never move on to the meat (Hebrew 5:11-14). This is the folly of New Evangelicalism which was established on the idea of being viewed by the world as intellectual based on being educated by idolatrous universities. God tells us: “The fear of the Lord is the beginning of wisdom: and the knowledge of the holy is understanding” (Proverbs 9:10). Do not swallow the unclean excretions being forced fed to students in the name of education and tolerance. Paying inflated prices for filth is not reasonable unless under the most extreme circumstances (2 Kings 6:24-25). Paul warns us of the foolishness of the world’s philosophies (Colossians 2:8), and advises us to “let God be true, but every man a liar” (Romans 3:4).

Giants in the Bible

Mary had Other Children (Part 3): Rebuttal of False Traditions

The Catholic Church further affirms this concept of Mary remaining a virgin to retain her purity as sinless. “The deepening of faith in the...

Yoga: the Dangers of Spiritual Deception