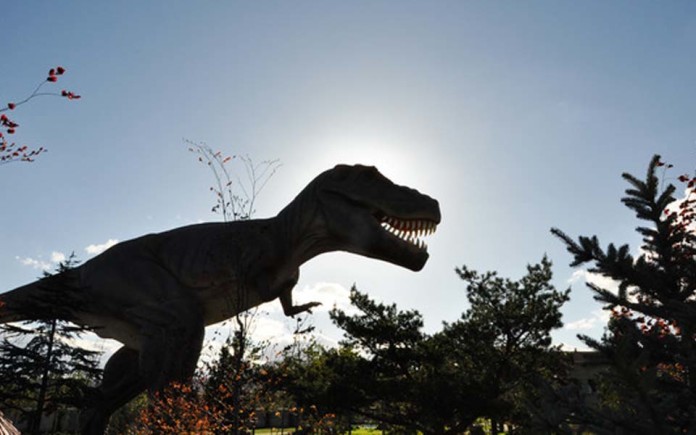 One of the most intriguing turn of events in the recent past has been the discovery of soft tissues in fossils that are allegedly millions of years old. Science a secular magazine reported this discovery:

Mary Schweitzer, a biology graduate student at Montana State University’s Museum of the Rockies, was examining a thin section of Tyrranosaurus rex bone…when she noticed a series of peculiar structures. Round and tiny and nucleated, they were threaded through the bone like red blood cells in blood vessels. But blood cells in a dinosaur bone should have disappeared eons ago. “I got goose bumps,” recalls Schweitzer. “It was exactly like looking at a slice of modern bone. But, of course, I couldn’t believe it. I said to the lab technician: ‘The bones, after all, are 65 million years old. How could blood cells survive that long?’”1)Morell, V. 1993. Dino DNA: The Hunt and the Hype. Science. 261 (5118): 160.

The Smithonian quoted Mary Schweitzer as saying, “I looked at this and I looked at this and I thought, this can’t be. Red blood cells don’t preserve.”2)Helen Fields, “Dinosaur Shocker,” Smithsonian Magazine online. Published May 2006; http://www.smithsonianmag.com/science-nature/dinosaur-shocker-115306469/ 60 Minutes reported: “It looked like the soft tissue she would have expected to find if it had been modern bone. This was impossible. This bone was 68 million years old.”3)B-Rex. 60 Minutes. Aired on CBS November 15, 2009; http://www.cbsnews.com/videos/b-rex/ National Geographic quotes Mary Schweitzer as saying “Finding these tissues in dinosaurs change the way we think about fossilization, because theories of how fossils are preserved don’t allow for this [soft tissue preservation]”4)Hillary Mayell, “T.Rex Soft Tissue Found Preserved,” National Geographic News, March 24, 2005; http://news.nationalgeographic.com/news/2005/03/0324_050324_trexsofttissue.html

Why should this discovery change long held beliefs about fossil preservation? Brian Thomas facetiously spoke of “allowing 100,000 years for collagen longevity,”5)Brian Thomas. M.S., “Dinosaur Soft Tissue: Biofilm or Blood Vessels?” Acts & Facts, Oct. 2008, p. 14 implied, obviously millions of years for preservation of soft tissues is out of the question. He later coauthored an article assuring “DNA should not survive at all, even if the creature only lived 50,000 years ago.”6)James J. S. Johnson, J.D., Jeffrey Tomkins, Ph.D., and Brian Thomas, M.S., “Dinosaur DNA Research: Is the tale wagging the evidence?” Acts & Facts, Oct. 2009, p. 5In another later article Brian Thomas referred to a study that shortened the possible age of this DNA.

The moa research team measured the half-life of DNA to be 521 years under average local temperatures. After this time, only half of the amount of DNA present when the animal died should remain. And after another 521 years, only half of that remains, and so on until none is left. At this rate, DNA molecules in bone break down after only 10,000 years into tiny chemical segments too short for modern technology to sequence. And this result assumes preservation factors that optimize biochemical longevity.7)Brian Thomas M.S., “DNA In Dinosaur Bones?” Acts & Facts, 2013, p. 15

Such discoveries have become more common. Now that researchers have been introduced to these facts they are beginning to look where they never thought to before due to their presuppositions of evolutionary long ages. “Many scientific journals including Nature, Science, PNAS, PLoS One, and the Journal of Vertebrate Paleontology are publishing the discovery of biological material found in fossils from dinosaur-layer and deeper strata, including flexible and transparent blood vessels, red blood cells, many various proteins like collagen and hemoglobin, and even DNA, from various Mesozoic creatures including hadrosaur, titanosaur, mosasaur, triceratops, T. rex, and Archaeopteryx. Our scientific intuition that such soft tissue would not survive 100,000, let alone 100 million, years, is reinforced by the attendant discoveries like short-lived left-handed amino acids, DNA, and Carbon 14, all in bones and other specimens from dinosaur-layer strata.”8)http://youngearth.com/80-million-year-old-hadrosaur-soft-tissue

Many examples can be cited. Let us consider the Mosasaur:

Mosasaurs were 40-foot-long marine reptiles with fearsome teeth. Presumed to be extinct, they have been found as fossils on every continent. One unique mosasaur fossil has been housed at the Dinosaur Institute of the Natural History Museum of Los Angeles County for over 40 years….

The researchers analyzed purple residue where eyes were once housed in the mosasaur skull. Standard thinking would suggest that some purple mineral had filled in that area during the “80 million years” the fossil was buried in a Kansas chalk formation. But that wasn’t the case. Instead, the presence of microscopic pigment-filled structures called melanosomes, which reduce the scattering of light inside vertebrate eyes, verified that the residue “may represent remnants of the retina.”

Also found among the “exceptionally preserved soft tissue” were dark red patches in the chest cavity. One of the patches was in the same area a dolphin’s heart would be located, and the other was in a likely spot for a liver. Is it possible that these two blood-rich organs did not completely decay? The investigators wanted to discover the chemical responsible for the red color, and the result was spectacular.

Using state-of-the-art equipment, they identified “hemoglobin decomposition products.” Hemoglobin is a major chemical constituent of blood. Anyone who has accidentally left meat out of the refrigerator overnight knows that it decomposes quickly. After death, hemoglobin proteins always fall apart, even when sterilized and with no water, spontaneously converting into smaller, simpler molecules.9)Thomas, B. 2010. Extraordinary Mosasaur Fossil Reveals Original Soft Tissues. Acts & Facts. 39 (11): 19

The scientists studying the Green River fossils propose a solution. First, they point out the absence of byproducts from aerobic bacteria (bacteria that require oxygen to live). This shows that the fossil was buried rapidly, sealing it off from any oxygen. Then  they suggest that trace metals in the original skin bonded to minerals in the rock and held the biological molecules in place. Even if true, these ideas do not explain how protein molecules could remain intact for millions of years.”10)Tommy Mitchell, More Soft Tissue in “Old Fossils” Answers, July-Sept. 2011, p. 34

Other intriguing discoveries include living spores from a Dominican stingless bee. “Even more amazing than this though are the findings of Dr. Cano, a microbiologist at California State Polytechnic University.  What Dr. Cano did was dissect a Dominican stingless bee trapped in amber, which was thought to be 25 to 40 million years old.  What he found were very well preserved bacterial spores inside.  In fact they were so well preserved that they actually grew when placed in the right environment.  In other words, they were still alive!  And, interestingly enough, their DNA closely matched the DNA of modern bacteria that grow inside modern bees.”11)Sean D. Pitman M.D., “Ancient Fossils with Preserved Soft Tissues and DNA” Updated January, 2010; http://www.detectingdesign.com/fossilizeddna.html

How about the female mosquito discovered with a full abdomen of its last meal. This discovery reported:

“very high levels of iron ions, a mineral in which animal blood is rich. So the team analyzed the sample using mass spectroscopy to get a more precise chemical makeup of the insect’s gut contents. They found telltale organic compounds that are the “fingerprints” of a substance called heme, the molecule that allows hemoglobin in blood to carry oxygen, and that gives blood its red color.”12)Blake D. Pastino, “First Fossil of Blood-Filled Misquito Discovered,”October 14, 2013; http://westerndigs.org/first-fossil-of-blood-engorged-mosquito-discovered/

Dr. Elizabeth Mitchell stated, “Iron, which is bound in hemoglobin to organic molecules called porphyrins, was 8 times more concentrated in the region of the bulging belly than in the male or in the female’s thorax. There was not enough sulfur present to suggest the iron was merely leached in from surrounding iron pyrite, a common sulfur-containing mineral.”13)Dr. Elizabeth Mitchell, “First Fossil Mosquito Found Filled with Blood,” Oct. 19, 2013; https://answersingenesis.org/fossils/how-are-fossils-formed/first-fossil-mosquito-found-filled-with-blood/ Thomas Brian reporting on this stated, “Fundamental physical laws describe how highly organized systems like proteins constantly decay unless an outside agency—like an engineer or a robot—maintains them. The PNAS study did not explain how hemoglobin could defy these basic laws.”14)Brian Thomas, “Bloody Misquito Fossil Suports Recent Creation,” October 25:2013; http://www.icr.org/article/7735/ This mosquito is allegedly 46 million years old.

Other fascinating fossil finds come from Burmite (Burmese amber) which was assigned an age of 100 million years.

Occurring near coal deposits, these remarkable specimens from Burma (present-day Myanmar) bear The Burmite fossil insects are spectacular and rare among ambers of the world….

Secular evolutionary scientists have considered fossils with what they call “proto-feathers,” the alleged transitional form before fully evolving into feathers, to be approximately 65 million years old. So we find fully formed flight feathers dated 35 million years before they supposedly evolved.

Many such examples could be cited and indefinitely expanded upon here but this is more than sufficient to acknowledge that the ages given to these “prehistoric” discoveries are not acceptable. We can either accept man’s inconsistent, self-contradicting opinions, or we can believe God’s infallible word.