More
HomeArticlesGiants in the Bible
Articles

Giants in the Bible

Anyone who has a nominal knowledge of the Bible is well aware that it speaks of giants having existed in the past.

Perhaps the most widely known mention of a giant in the Bible is Goliath, whom David slayed with a stone and sling (1 Samuel 17). Goliath is said to stand “whose height was six cubits and a span.” (1 Samuel 17:4); which would measure approximately 9 foot 9 inches. He was from the city of Gath which was known for harboring a tribe of giants (Joshua 11:22), and Goliath had 4 brothers mentioned that later attempted to kill David (2 Samuel 21:15-22), which is why David grabbed 5 stones when he killed Goliath (1 Samuel 17:40).

Remarkable confirmation of this event comes from a number of different historical sources. Notice that after David killed Goliath, David brought the head of this giant to  Jerusalem (1 Samuel 17:54), and when king Saul inquired of him, he continued to carry the head as if it were a trophy to flaunt (1 Samuel 17:57).

The fact that the bones of giants were indeed in public view was also mentioned by Tertullian, a Christian from north Africa, in the later second early third century A.D.. He wrote, “There are the carcases of the giants of old time; it will be obvious enough that they are not absolutely decayed, for their bony frames are still extant…. For instance, even lately in this very city, when they were sacrilegiously laying the foundations of the Odeum on a good many ancient graves, people were horror-stricken to discover, after some five hundred years, bones, which still retained their moisture, and hair which had not lost its perfume. It is certain not only that bones remain indurated, but also that teeth continue undecayed for ages-both of them the lasting germs of that body which is to sprout into life again in the resurrection.”4)Tertullian,n On the Resurrection of the Flesh, chap. XLII; in Ante-Nicene Fathers, (ed. Alexander Roberts and James Donaldson), Hendrickson Publishers (Peabody, Massachusetts: fifth printing 2012), Vol. 3, p. 576

In Recognitions of Clement we find a similar comment. “In the ninth generation are born the giants, so called of old,… men of immense bodies, whose bones, of enormous size, are still shown in some places for confirmation.”5)Recognitions of Clement, bk. 1, chap. XXVIII; in Ante-Nicene Fathers, (ed. Alexander Roberts and James Donaldson), Hendrickson Publishers (Peabody, Massachusetts: fifth printing 2012), Vol. 8, p. 85 This text is a psuedograph writing claiming to be of Celement of Rome, a first century Christian bishop. The date of this writing is debated, ranging from the second century to the fourth. It was first quoted by Origen in the second century and the next earliest quote of it was from Eusibius (325 A.D.). These citations do not set affirmative dates as it is possible it has been expanded by later authors as was the case with the longer versions of Ignatius’ epistles. However, as it stands, it remains strong evidence as eyewitnesses of these bones in public places. They were presented as trophies for a public showcase, just as David boasted by carrying Goliath’s head around.

It was obviously a great thing to have such a trophy as it indicated someone or perhaps their ancestors had slayed one of the giants that were known for their mighty acts of war. Genesis 6:4 tells us these giants were well known and “became mighty men which were of old, men of renown.” Josephus spoke of these giants, saying, “on account of the confidence they had in their own strength; for the tradition is, that these men did what resembled the acts of those whom the Grecians call giants.”6) Josephus, Antiquity of the Jews, bk. I, chap. III, para. 1; in The complete works of Josephus the Jewish Historian (trans. William Whiston), Master Books, (Green Forest, AR.: 2008), p. 3 The Greeks considered these giants heroes. Secular historian Robin Lane Fox commented on some of the Greek texts that mentioned giant bones in public view. Speaking of Philostratus book On Heroes, Fox states:

He [Philostratus] also gave space to visible proofs of the heroes, especially the giant skeletons which had recently come to light on nearby beaches and headlands. Many passerby had noticed them, bones fit for fifteen-foot heroes, as tall as Protesilaus himself. To prove it, Philostratus took his readers on a grand tour of the old bones of the third-century Empire.

This evidence wads not his invention. Similar skeletons had raised problems which only the oracles could solve: at Claros, Appolo had  had to tell puzzled questioners the nature of huge bones which they had found in a riverbed. The reasons lay in geological history. Relics from the age of the dinosaurs were still plentiful in the third century, and were exposed by the winds, the seas and the farmers. Even the Emperors collected them. Carcasses of long-dead monsters had been mistaken for the bones of heroes at least since the mid-sixth century B.C….7)Robin Lane Fox, Pagans and Christians, Alfred A. Knopf, Inc. (New York, NY.: 1986), p. 146-147

As a secular historian, he scoffs at the idea that giants actually existed and explains these bones away as if they were dinosaur bones. Anyone familiar with these ancient authors should never assume that this era was so foolish to actually be able to mistake dinosaur bones for humans giants. The quote above acknowledges the wide spread knowledge and eye-witnesses of these giant’s bones. In a later portion, Fox writes, “When an unnamed Roman Emperor order the widening of the Syrian river Orontes on its course to Antioch, the workers unearthed the bones of a giant skeleton…. it took a god to make sense of a dinosaur’s bones.”8)Robin Lane Fox, Pagans and Christians, Alfred A. Knopf, Inc. (New York, NY.: 1986), p. 226 The heroes to the Greeks were deified men of great stature. Men, not monsters as Fox assumes and would be obvious to all men when looking upon these skeletons.

Deuteronomy 3:11 mentions Og the king of Bashan who was “remained of the remnant of giants; behold, his bedstead was a bedstead of iron; is it not in Rabbath of the children of Ammon? nine cubits was the length thereof, and four cubits the breadth of it, after the cubit of a man.” His bed measured around thirteen and a half feet by six foot, being made of iron to support his immense weight. Marco Polo spoke of large, strong, heavy giants he seen during his travels in Zanzibar which is situated off the coast of Tanganyika, Africa. He wrote:

The men are large and fat, although they are not tall in proportion to their bulk. They are strong limbed and as hefty as giants. They are so strong that they can carry as many as four ordinary men. This is not altogether surprising because while they can carry as many as four men, they eat enough for five.9)Marco Polo, Edited by Maria Bellonci, Teresa Waugh, The Travels of Marco Polo, Facts on File, 1984, p. 175

During the wilderness sojourning of the Israelites, they met with giants on a number of occasions. Deuteronomy 2:20-21 states, “That also was accounted a land of giants: giants dwelt therein in old time; and the Ammonites call them Zamzummims; a people great, and many, and tall, as the Anakims; but the Lord destroyed them before them; and they succeeded them, and dwelt in their stead.” Numbers 13 speaks of the the spies who entered the promise land saw giants, “all the people that we saw in it are men of a great stature. And there we saw the giants, the sons of Anak, which come of the giants: and we were in our own sight as grasshoppers, and so we were in their sight” (Numbers 13:32-33).

Egyptian inscriptions have been discovered that are on display in the Berlin Museum contains incantations against the “Iy Aneq,” believed to be a reference to what the Bible terms Anak or Anakim (plural).10)Rob Sulivan, “Egyptian War Correspondents and the Biblical Giants,” accessible at http://www.biblearchaeology.org/post/2015/02/27/Egyptian-War-Correspondents-and-the-Biblical-Giants.aspx

Similarly, there exists an Egyptian relief (stone carving) that recounts Egypt’s battles under Ramses II against the Hittites near Kadesh. In the relief, we are told about the capture of two Shasu spies. Historians have debated the unusual size given to the captured forces in the relief. It is one thing for Egyptian carvings to represent their Pharaohs with almost superhuman size. It is quite another for them to depict their enemies as such. Again, the Egyptians seem to be encountering forces of unusual height in their exploits in and around Canaan.11)Rob Sulivan, “Egyptian War Correspondents and the Biblical Giants,” accessible at http://www.biblearchaeology.org/post/2015/02/27/Egyptian-War-Correspondents-and-the-Biblical-Giants.aspx 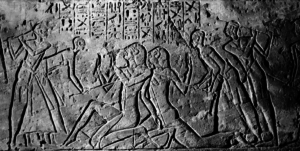 However, as we saw Og, the king of Bashan, was a giant, perhaps other images archaeologist have uncovered are not exaggerating the size of the royalty. In fact, it would be reasonable for the nations to pick the largest man among them to be the king over them (1 Samuel 9:2).

Joshua 15:13 says, “And unto Caleb the son of Jephunneh he gave a part among the children of Judah, according to the commandment of the Lord to Joshua, even the city of Arba the father of Anak, which city is Hebron.” So we see that Israel was well aware of the history of these giants and their ancestors. All the ancient people and cultures were aware of these giants and wrote about them in the historical texts. The question remains, why would our modern historians be so skeptical about well established fact?

Tower of Babel (Part 3) What was the Tower?

A Review of Tremper Longman III, Confronting Old Testament Controversies: Pressing Questions about Evolution, Sexuality, History, and Violence (2019) I have only been acquainted with...

Reasons to Believe in the Resurrection of Christ (Part 2)

What Makes a Reliable Bible Version?

How is an Ancient Toilet Evidence for the Bible?