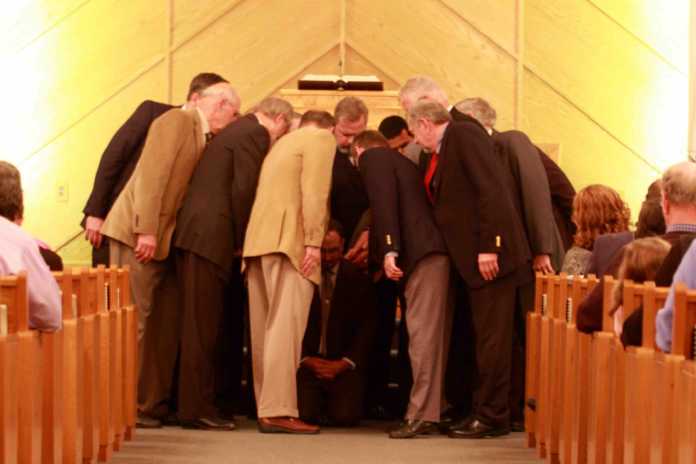 One way it is used frequently is to identify a violent act (Esther 2:21; 3:5-6; 9:2-16). The term is first use by Ruben telling his brothers to “lay no hand” on their brother Joseph (Genesis 37:22). God told Moses, “But Pharaoh shall not hearken unto you, that I may lay my hand upon Egypt, and bring forth mine armies, and my people the children of Israel, out of the land of Egypt by great judgments And the Egyptians shall know that I am the Lord, when I stretch forth mine hand upon Egypt…” (Exodus 7:4-5). Nehemiah warned the merchants about selling on the Sabbath; “if ye do so again, I will lay hands on you” (Nehemiah 13:21). This was no empty threat, “I contended with them, and cursed them, and smote certain of them, and plucked off their hair” (Nehemiah 13:25). The chief priests and scribes sought to arrest Jesus (Luke 20:19; Mark 12:12) and eventually did so (Matthew 26:50; Luke 21:12). Jesus warned His disciples of persecution, saying “they shall lay their hands on you, and persecute you” (Luke 21:12), and they did (Acts 4:3; 5:18).

Another way it is used in the Bible is to express the prayer or a blessing over a person.

Jacob crossed his hands to bless his grandsons Ephraim and Manasseh (Genesis 17:20), which displeased Joseph. Jesus blessed the little children (Mark 10:16). Many of these blessings are receiving a healing (Matthew 9:18; Mark 7:32; 16:18; Luke 13:13; Acts 9:12, 15-17). Other times these blessings are prayed for the ministry of an individuals or assembly of people. In Acts 6, the people were to pick “men of honest report, full of the Holy Ghost and wisdom” (Acts 6:3), which were then “set before the apostles: and when they had prayed, they laid their hands on them” (Acts 6:6). In this sense it was to ordain their ministry from the beginning with God’s blessing. This is also the sense used in 1 Timothy 4:13-14 and 2 Timothy 1:6, which is evident from the context to note as Kenneth Wuest acknowledges,

This special enduement was given Timothy “by prophecy.” That is, prophetic intimations were given to Paul as to the selection of Timothy for the ministerial office…. These prophetic intimations were repeated in connection with the ceremony of ordination at which time the hands of the Church elders were laid upon Timothy. The laying on of hands speaks of identification. Here it was the outward act and ceremony symbolizing the fact that Timothy was now to be identified with the elders in the common work of the ministry of the Word.1)Kenneth Wuest,  The Pastoral Epistles, Eerdmans Publishing Co., 1952, p. 75

Introducing the portion of his book about laying on of hands, charismatic apologist Michael L. Brown states, “For those of you who might not be aware of this, while laying on of hands is not central to the present evangelistically driven outpouring, in many circles, there is time set aside in nightly services to lay hands on hungry believers for a fresh touch from God, which often results in testimony of miraculous impartation.”2)Michael L. Brown, Let No One Deceive You: Confronting the Critics of Revival, Destiny Image Publishers, Inc., 1997, p. 183 Anyone acquainted with these events knows: 1) the majority of time is spent each night with this portion of the service, 2) those who attend these meetings do so for this portion of the service, and 3) the entire meeting is spent building hype in anticipation for this portion of the service. Furthermore, there is no need “for a fresh touch from God” as one is sealed by the Spirit of God by belief (Ephesians 1:13; John 7:39).  Brown’s attempt to prove the “impartation” by the laying on of hands is as follows:

According to Numbers 27:18-23, Moses was to lay his hand on Joshua and commission him before the people of Israel, giving him some of his authority. Thus Deuteronomy 34:9 states, “And Joshua the son of Nun was filled of the spirit of wisdom because Moses had laid his hands upon him and the Israelites listened to him, and did what the LORD commanded Moses.” Something happened to Joshua when Moses laid hands on him! He received something tangible.3)Michael L. Brown, Let No One Deceive You: Confronting the Critics of Revival, Destiny Image Publishers, Inc., 1997, p. 184

The faulty NIV as a dynamic equivalent causes much problem with this verse as can be noticed when compared to the KJV where the grammatical difference shows that Joshua’s “spirit of wisdom” was not “because” Moses laid hands on him. Brown opted out on citing Numbers 27:18-23 which refutes his attempt to prove there was an impartation of any “spirit.” Numbers 27:18 says the spirit was already present “in” Joshua while verse 19, 20, and 23 tell the purpose of laying hands on him was for the exchange of authority, which is why it was to be done in front of the whole congregation of Israel.

This is the reason for laying on of hands in the New Testament as well which Brown also identifies but uses Moses and Joshua to say it was impartation of the spirit as well.

(By the way, Paul’s exhortation to Timothy in 1 Timothy 5:22 to “lay hands suddenly on no man” – in the familiar language of the King James – does not mean, “Don’t come up on someone unexpectedly on a prayer line” [although that may be good “ministry etiquette”]; rather, it means, “Don’t be hasty in ordaining someone into a leadership position.”). But we must remember that this was not merely a formal ceremony signifying public recognition (although that is what it has become in many modern church circles); instead, it was also understood to be an act of impartation (as with Moses and Joshua).4)Michael L. Brown, Let No One Deceive You: Confronting the Critics of Revival, Destiny Image Publishers, Inc., 1997, p. 185-186(Brackets in original)

Kenneth Hagin questions, “Did you ever wonder why Peter and John were singled out to make that journey to Samaria [in Acts 8]? Because they had been endowed by the Spirit of God to lay hands on people to receive the Holy Spirit. Some have this special ministry and some do not, but whether you do or not, you can minister in faith and God will honor your faith.”7)Kenneth E. Hagin, The Bible Way To Receive the Holy Spirit, Kenneth Hagin Ministries, Inc., 1992, p. 6 It is a major error in hermeneutics to derive doctrine out of an obscure passage without confirming the thing with parallel passages. It is a major heresy to make things up that are not in the Bible at all such as the laying on of hands is a “special ministry” that some have and some do not. Of course, Hagin does not need Scriptures to back up his claimed doctrine; he has direct revelations and visions of Jesus.

You can do the same things I do in my meetings.

I do them because the Lord appeared to me in a vision in 1950 and said, “I have given you a ministry of laying on of hands. Before you lay hands on them, always read or quote Acts 19:6 to them: ‘And when Paul had laid his hands upon them, the Holy Ghost came on them; and they spoke with tongues.’”

So forget what the Bible has to say and just take Hagin’s word for it. But understand that this is one of those experiences that can only be validated by testing it personally since the Bible is silent on this “special ministry.” Charles Ryrie offers an explanation of Acts 8 which shatters Hagin’s best proof text. “It seems to me that the best explanation of this delay in giving the Spirit to the Samaritans lies in the schismatic nature of the Samaritan religion. Because the Samaritans had their own worship which was a rival to the Jewish worship in Jerusalem, it was necessary to prove to them that their new faith was not to be set up as a rival to the new faith that had taken root in Jerusalem. And the best was for God to show the Samaritan believers that they belonged to the same faith and group as Jerusalem believers (and contrariwise the best way to show the Jerusalem leaders that the Samaritans were genuinely saved) was to delay the giving of the Spirit until Peter and John came from Jerusalem to Samaria…. It preserved the unity of the church in this early stage.”9)Charles C. Ryrie, The Holy Spirit, Revised and Expanded, Moody Press, 1997, p. 101

It is important to understand accurately what the Bible means by the phrase “laying on of hands” instead of falling for the false doctrine of “impartation” which has linked many movements with this similar spirit.

John Arnott, senior pastor of the Toronto Vineyard, received his “blessing” indirectly from Howard-Brown, through Randy Clark, Pastor of the Vineyard Church in St. Louis, Missouri. In 1993, Pastor Clark, discouraged and approaching a nervous breakdown, was encouraged to attend a Howard-Brown meeting that was being held at Kenneth Haggin’s Rhema Bible College in Tulsa, Oklahoma.10)Roger Oakland, New Wine or Old Deception? A Biblical Perspective of Experience-Based Christianity, The Word For Today, 1995, p. 22

Just as this “anointing” lifted Pastor Clark out of his despair, the occult technique of Reiki is claimed to have the same effect. “Many Practitioners of therapeutic touch believe that it not only enhances their nursing abilities, but also prevents career burnout.”11)Rochelle Mackey, American Journal Of Nursing, “Discovering The Healing Power of Therapeutic Touch,” April, 1995, p. 27

A Christian man I met recently, testified that he went into a trance when he was touched on his forehead and then he went “completely out of it for hours.”13)Roger Oakland, New Wine or Old Deception? A Biblical Perspective of Experience-Based Christianity, The Word For Today, 1995, p. 45

…a Pentecostal church, where hands were laid on him, and he was what they called “slain in the spirit.” He was lying on the floor in a trance. …Mark also received a gift of tongues.14)Kurt E. Koch, Occult ABC: Exposing Occult Practices and Ideologies, Kregel Publications, second edition 1986, originally published as Okkultes ABC [German] in 1978, translated by Michael Freeman in 1978 as Satan’s Devices, p. 33

The account concludes with an exorcism of a demon from Mark in which Dr. Koch remarks, “We see here again that demons sometimes claim to be Jesus. Further, it here becomes evident that the so-called baptism of the Spirit in the charismatic movement is usually an opportunity for demons to enter.”15)Kurt E. Koch, Occult ABC: Exposing Occult Practices and Ideologies, Kregel Publications, second edition 1986, originally published as Okkultes ABC [German] in 1978, translated by Michael Freeman in 1978 as Satan’s Devices, p. 34 The very activities happening in churches across the world today, ironically, were the actions that stir up the hysteria during the Salem Witch Trials. “Affliction took two main forms. In the first, the afflicted person went into seizures and hallucinations at the glance of the accused person, and could be recovered by her touch.”16)Chadwick Hansen, “Andover Witchcraft and the Causes of the Salem Witchcraft Trials,” in Howard Kerr and Charles L. Crow, ed., The Occult In America: New Historical Perspectives, The University of Illinois Press, 1983, p. 51 There is a great chasm dividing the biblical doctrine of laying on of hands and what is being passed off in charismatic churches.