The Skull of Homo Naledi

Excerpt from Homo Naledi: The Rising Star of Evolutionary Icons by Heath Henning. This book can be downloaded for free.

Wikipedia reported “Four skulls were discovered, thought to be two female and two males…”1)Wikipedia, Homo naledi; https://en.wikipedia.org/wiki/Homo_naledi The Berger et al. paper stated, “The endocranial volume of all H. naledi specimens is clearly small compared to most known examples of Homo…. Despite its small vault size, the cranium of H. naledi is structurally similar to those of early Homo.”2)Lee Berger, et al., “Homo naledi, a new species of the genus Homo from the Dinaledi Chamber, South Africa,” Sep 10, 2015, http://elifesciences.org/content/4/e09560.full Notice how this varies dramatically from Dawkin’s discussion saying that the small size was a problem for the creature to be identified as Homo genus (human kind), he concludes, however, we should no longer consider large brains to be the hallmark of defining what is unique about genus Homo.3)See Dawkin’s quote in Heath Henning, Homo Naledi: The Rising Star of Evolutionary Icons, p. 41 His ridiculous conclusion is simply following the suggested rout from Berger and his team. They claim the structure is similar enough to ignore the size difference.

National Geographic revealed “In their general morphology they clearly looked advanced enough to be called Homo. But the braincases were tiny—a mere 560 cubic centimeters for the males and 465 for the females… These were not human beings. These were pinheads, with some human like parts.”4)Jamie Shreeve, “This Face Changes the Human Story. But How?” Sep. 10, 2015, National Geographic; http://news.nationalgeographic.com/2015/09/150910-human-evolution-change/ The error is to claim “some human like parts” unless they are liberally defining the word “like.” However, they are accurate in the comments about the braincases identifying that they were not human beings—but then why insist on calling them Homo? The range of braincase 465-560 is consistent with Orangutans and Chimpanzees but humans generally measure at 1100-1700, twice the size of H. naledi. This is an extremely important factor to note.

Since there are variations in tissues and fluids, the cranial capacity is never exactly equal to brain size, but can give an approximation. A skull’s capacity is determined by pouring seeds or buckshot into the large hole at the base of the skull (foramen magnum), then emptying the pellets in to a measuring jar. The volume is usually given in cubic centimeters (cc.). Living humans have a cranial capacity ranging from about 950cc. to 1,800cc., with the average about 1,400cc.5)Richard Milner, The Encyclopedia of Evolution: Humanity’s Search for Its Origin, Henry Holt and Company, 1993, p. 98

However, the reports and images cannot verify this claim from Dirks. Dr. Elizebeth Mitchell accurately assessed, “Nevertheless, despite a sloped lower face and—based on the published photographs—no vissible evidence of the protruding nasal bones typical of all humans, Berger has identified the fossils as a new species of human ancestor, Homo naledi.”7)Dr. Elizebeth Mitchell, “Is Homo naledi a New Species of Human Ancestor?” Sep. 12, 2015, https://answersingenesis.org/human-evolution/homo-naledi-new-species-human-ancestor/ What Dr. Mitchell is identifying is summed up more clearly by Dr. Dave Menton, “The human skull is easily distinguished from all living apes, though there are, of course, similarities. The vault of the skull is large in humans because of their relatively large brain compared to apes. From this perspective, the face of the human is nearly vertical, while that of the ape slopes forward from its upper face to its chin.  From a side view, the bony socket of the eye (the orbit) of an ape is obscured by its broad, flat upper face.  Humans, on the other hand, have a more curved upper face and forehead, clearly revealing the orbit of the eye from a side view.  Another distinctive feature of the human skull is the nose bone that our glasses rest on. Apes do not have protruding nasal bones and would have great difficulty wearing glasses.”8)Dr. David Menton, “Did Humans Really Evolve from Apelike Creatures?” http://www.answersingenesis.org/articles/nab2/humans-evolve-apelike-creatures

The image below was presented by the National Geographic article to present the comparison of the Homo naledi skull to the average human skull. National Geographic indicated that the H. naledi skull in the image was the largest one found at 560 cubic centimeters though left no indicator of the approximate size shadowed by the human skull. Did they offer the largest scale possible for the human skull or the smallest to attempt to gap the obvious visual size difference? 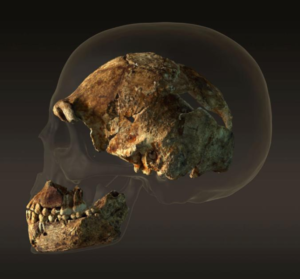 Notice how only giving the skull cap and jaw, the image is forced within a human skull shadowed in the back ground. Is this a fair representation? First, note the slope of the human skull from the top to the brow ridge in comparison to the H. naledi. The angle is significantly different. 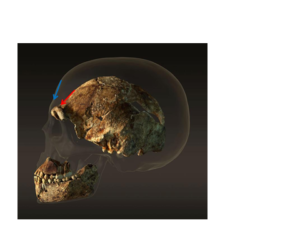 Notice next how National Geographic identifies the slope from the bottom of the human skull is almost the exact angle they give to the H. naledi skull. Again, we ask if the is accurate representation of filling in the gap of the bones. 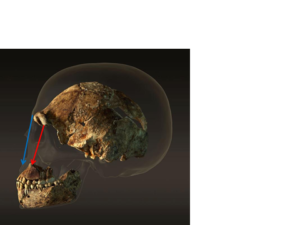 Finally, draw your attention to the slope at the angle one would expect to find if we followed a consistent trajectory of the angle identifiable from the jaw and the forehead. Calculating these angles we can see that the skull cap should be pushed further back for an accurate representation. 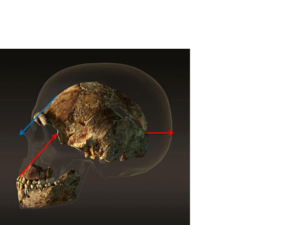 These angles are more consistent with a chimpanzee’s skulls. 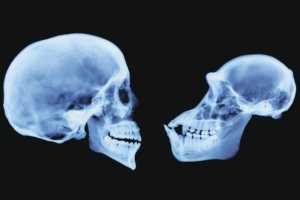 Notice the significant slope of the face as well as the lack of a nose bone and the size difference. “The human skull (left) houses a brain that’s three to four times the size of a chimpanzee’s (right). Scientists have spotted a stretch of DNA that could have prompted this expansion.”11)Josh Fischman, How Our Brains got Big…” September  4, 2011; http://chronicle.com/article/How-Our-Brains-Got-BigOur/128878/ Notice what happens when the portions of the Homo naledi skull are laid over the chimpanzee skull with the exact angles indicated by the arrows above. 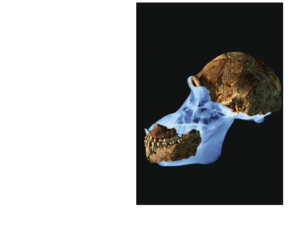 The problem is, which is a frequent one with evolutionary icons, is that the portion of the skull that is missing is conveniently the same portions that would tell too much of the creature had the significant portion of the skull been retrieved. Bonnie Yoshida offering an online lecture on “Early Hominin Evolution” says, “The face and jaws of humans lie underneath the brain case rather than protruding out like the ape. If you look at a profile-view of the human skull…the lower face hardly projects at all. A protruding lower face or snout-like appearance… is called prognathism. A gradual reduction in prognathism is a trend through time in the hominin lineage.”12)Bonnie Yoshida, “Early Hominin Evolution,” Last Updated 01/13/2015; http://gctest,grossmont.edu/people/bonnie-yoshida-levine/online-lectures/early-hominin-ev.aspex If Berger’s discovery included this portion of the skull he would not be able to speculate it as an intermediate type between his earlier discovery Australopithecus Sediba and modern Homo sapiens.

Java Man is another example of a discovery that contained similar portions of the skull leaving it dubious. The discoverer, a Dutch anthropologist Eugene Dubois (1858-1940) maintained his claim that it was an intermediate link while some evolutionary textbooks and creationists misunderstood him as reporting it as a giant gibbon. Creationists today hold that Java Man was a man, generally classified by evolutionists as Homo erectus which was simply human and is evident by the facts indicating Homo erectus had seafaring capabilities and was determined to have been present on the islands of “Lombok, Bali, Sumbawa, and Flores.”13)Jonathan Sarfati, PH.D., F.M., The Greatest Hoax on Earth? Refuting Dawkins on Evolution, Creation Book Publishers (Atlanta, Georgia: 2010), p. 161 With the many claims of evolutionary icons in the past, we find very slim pickings as of what bones can determine being so fragmentary. With Homo naledi it is different because there was a wealth of bones discovered, yet the discovery still conveniently allows the ambiguity of a faithful or undisputable reconstruction. The image below is given in the Berger et al. paper shows the blue portion as the computer generated reconstruction as how the artist wants the skull to appear as the shape it was reveal from National Geographic without the significant slant (prognathism) that would indicate a more ape-like appearance. Interestingly, hidden in the technical jargon of the Berger et al. paper is the comparison of the dentition of Homo naledi with Homo erectus exposing “differing from the steeply inclined posterior face of H. naledi…”14)Lee Berger, et al., “Homo naledi, a new species of the genus Homo from the Dinaledi Chamber, South Africa,” Sep 10, 2015, http://elifesciences.org/content/4/e09560.full which depicts a sloping face we would expect but are not being shown in the artistic renditions.

Beware of the New Prophets

Gnosticism was the first religion opposing God as it was the serpent offering knowledge (gnosis) to man (Genesis 3:5-6). This knowledge has been continued...

Why Dinosaur are NOT Millions of Years Old

History of the Heresy of Transubstantiation

Overview of the Book of Job (Notes for Class 2)