What are Supernova Remnants (SNRs) and how is it evidence for a young creation? When a star explodes it hurls debris outwards at 7000 kilometers per second. The distance of this debris is then measured to determine the time of the supernova based on this expansion rate. This has been argued to give an approximate age of the known universe no greater than 7,000 years.1)Jonathan Sarfati, Refuting Compromise, Master Books (Green Forest, AR: 2004), pp. 346-350, 2)Jonathan Sarfati, “Exploding stars point to a young universe: Where are all the supernova remnants?” https://creation.com/exploding-stars-point-to-a-young-universe , 3)K. Davies, “Distribution of Supernova Remnants in the Galaxy,” in Proceeding of the Third International Conference on Creationism (Ed. (R.E. Walsh), 1994, pp. 175-184, 4)Brian Thomas, “Rare Supernova Recalls Missing Remnants Mystery,” http://www.icr.org/article/6373/245/ Because supernovas occur in space, there should be no resistance or catastrophic events altering the theoretical calculations, so uniformitarian assumptions seems valid to apply to these calculations.

Expressed a little more technically, a supernova remnants is measured by its surface brightness and size. As they age the brightness fades and the diameter expands. This relationship is normally expressed Σ-d (radio frequencies Σ, diameter d). These remnants are divided and classified into 3 stages. The first stage is limited to the expansion that would calculate to 300 years of debris traveling through space after the original blast. By this time debris traveling at this high of a speed has reached approximately 7 parsecs (a parsec is equivalent to 3.26 light-years, that would be 31 million million km or 19 million million miles). Seven parsecs would be an object 25,000 times larger than our solar system (which is only about 8 light-hours across, that is 8,600 million km or 5,400 million miles). It is estimated the supernovas should occur every 25 years, though only 19% should be visible to us. With these calculations we should expect to find 12 first stage supernova remnants in our galaxy. We only find 5 supernovas remnants in the first stage which is compatible with a young universe.

The third stage would be defined as an expansion from 120,000 years and would last for up to 1 million or possibly up to 6 million years. Billions of years would project 35,000 with a 14% visible making 5,000 observable to us. This third stage of supernova remnants is said to be missing completely which indicates 97% of the predicted supernova remnants in our galaxy to be no existing. 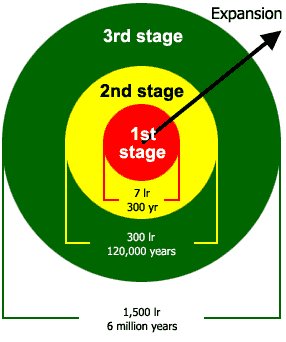 I am aware that this was recently contested by creationist Danny Faulkner,5)Danny Faulkner, “Are Old Supernova Remnants Really Missing? Re-Evaluating a Well-Known Young-Universe Argument,” Answers Research Journal 10(2017):245-258 however, I am not so sure this argument should be given up as Faulkner implies. What he notes in assessing 17 supernova remnants is that the secular literature on the topic has given dates older than 7,000 years. The flaws I see in his reasoning is (1) These are all based on secular literature which presupposes long ages so creationists should not give up this argument but rather figure out the calculations themselves.  (2) He acknowledges that only one of the supernova remnants assessed by these secular standards find agreement from two separate sources on an age. For example, he writes referring to the Cyrus Loop, “Edwin Hubble, who found an age of 150,000 years… [F] Zwicky computed the age of the Cyrus Loop at a little more than 10,000 years.”6)Danny Faulkner, “Are Old Supernova Remnants Really Missing? Re-Evaluating a Well-Known Young-Universe Argument,” Answers Research Journal 10(2017), p. 250 In other words, the secular science is arguing about there long ages assigned to them so these calculations obviously are known to have error in the majority of the cases as calculations continue to get refined and usually become younger when new ages are calculated. (3) There are multiple methods being used in making these calculations which are producing conflicting calculations. (4) There is not an established view of the merging of the stages of supernova remnants so it becomes relative to the scientist’s opinion performing the calculations. (5) Scientists have not even agreed upon all supernova remnants are supernova remnants, as some are considered superbubbles such as G54 138-01-94 for example.

My opinion is this argument still stands as Faulkner indicated that according to the secular calculations, the oldest date found was 4.5 million years old which is far younger than the 13.773 billion years as the age of the universe. This also take into account that this number carries an uncertainty of 59 million years while the Planck collaboration estimated in 2015 an age of 13.813 billion years with an uncertainty of 38 million years. A 4.5 million maximum age from supernova remnants is still smaller than the uncertainties in the calculation for the age of the universe. The following graph was from Faulkner’s paper with the comment “Table 1. Estimated ages for supernova remnants discussed, in order of increasing age (in the case of a single age determination) or the greater age (in the cases of more than one age determination). The asterisk indicates concordance of two independent age determinations. The descriptor of “Stage 3” in the third column denotes supernova remnants which have been identified as being in stage three. The last two entries are classified as superbubbles rather than supernova remnants. However, if they are due to nearly simultaneous multiple supernova explosions, then they, too, would be in stage three.”7)Danny Faulkner, “Are Old Supernova Remnants Really Missing? Re-Evaluating a Well-Known Young-Universe Argument,” Answers Research Journal 10(2017), p. 254 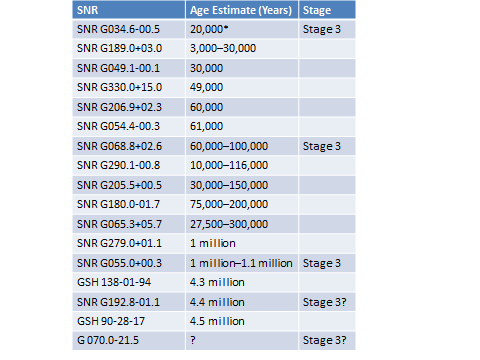 So in this graph he has taken the oldest ages contested for these certain supernova remnants and has added superbubbles to attempt to drive his argument further than is justified. Also note that Stage 3 SNRs are supposed to be an expansion of 300 light years which should take 120,000 years, yet Faulkner has added 2 as Stage 3 while they are under 120,000 years. Of the 3 other Stage 3 SNRs listed, 2 have question marks, and the very last one is considered a superbubble. I  simply do not finding Faulkner’s contention convincing. Furthermore, Dr. Faulkner permits other arguments for a young creation that allow maximum dates higher than 7,000 years in the chapter he coauthored  in The Answers Book 4.8)The Answers Book 4 (ed. Ken Ham), Master Books (Green Forest, AR: 2013), Chapter 10, “What are some of the Best Evidences in Science for a Young Creation?,” pp. 111-129 So why does he reject this one?

My humble opinion is that creationist should seek their own calculations for supernova remnants and not put to much authority in the calculations which are argued about from secular astronomers. Secondly, I would suggest that creationists should seek confirmation of supernovas from historical literature. More reliable dates could be confirmed from historical sources that have observed the actual events. This has recently been accomplished according to Wu Jiabi, a Chinese historian who finds evidence in ancient annals describing the supernova named PK 1209-52 having taken place around 42 years into the reign of the  Emperor Yao (2356-2255BC).9)Ling Xi, “Chinese historian dates exploded supernova to time of legendary Emperor Yao as told in ancient annals,” Dec. 22, 2022; https://amp-scmp-com.cdn.ampproject.org/v/s/amp.scmp.com/news/china/science/article/3204241/chinese-historian-dates-exploded-supernova-time-legendary-emperor-yao-told-ancient-annals?amp_gsa=1&amp_js_v=a9&usqp=mq331AQIKAGwASCAAgM%3D#amp_tf=From%20%251%24s&aoh=16717220350728&csi=0&referrer=https%3A%2F%2Fwww.google.com&ampshare=https%3A%2F%2Fwww.scmp.com%2Fnews%2Fchina%2Fscience%2Farticle%2F3204241%2Fchinese-historian-dates-exploded-supernova-time-legendary-emperor-yao-told-ancient-annals Other supernovas have been documented in 185 A.D. by imperial astronomers of the Han dynasty, and in 1054 A.D., by Song dynasty astronomers.

Theoretically, we should be able to find literary evidence for all visible supernova remnants since man has existed from the beginning of creation, only preceded by the creation of stars by a few days. With the exception of what literature evidence may have been lost during Noah’s Flood and other which may have decayed with the passage of time, we should assume historical records from the various cultures across the world throughout history that had obsessively observed the stars and documented odd events. One example is the wise men who followed a star to find the Christ child who was born king of the Jews (Matthew 2:1-10). Whether this event was a supernova, planetary aligning or something supernatural, it confirms the ancient societies observed the stars and noted odd events in the heavens. And as the New Testament records this oddity, so many other ancient text record such events that could be reconciled with modern astronomical science.

While working on a commentary for Psalm 1, I was planing to write an excursus on the how the phrase “counsel” and “sitteth in...

Education: A Brief History and Cause of Decadency (Part 1)

The Word of Faith Heresy

Overview of the Book of Job (Notes for Class 2)