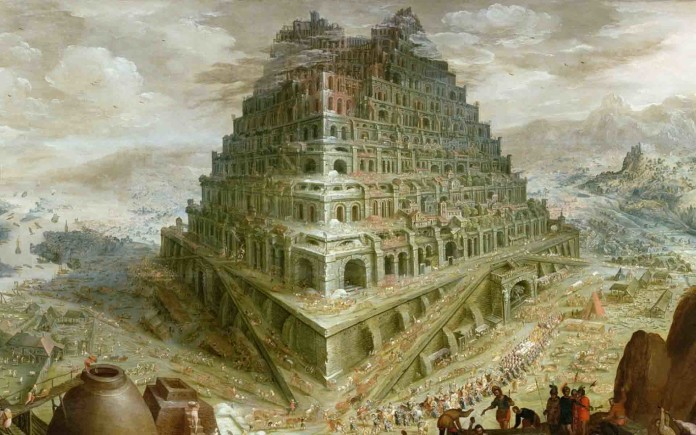 In an article from Answers Magazine, the question was asked “what did the Tower look like?” with the answer stating, “Studying the oldest buildings from the area, archaeologists assume the Tower of Babel looked like a ziggurat. But we can’t just study later buildings and calculate backward.”1)Answers Magazine, Vol. 3, No. 2 April-June 2008, p. 29 This is accurate advice as archaeologists have assumed they found the Tower of Babel but in reality they have found the site that ziggurats have been built on top of many times over. Consider the Burj Khalifa which is the world’s largest building today.

According to the design architect, Adrian Smith, the triple lobed footprint of the building was inspired by the flower Hymenocallis.
The tower is composed of three elements arranged around a central core. As the tower rises from the flat desert base, setbacks occur at each element in a spiralling pattern, decreasing the cross section of the tower as it reaches toward the sky.2)http://burj-khalifa.readabout.org/design-and-architecture/

The spiraling design is to reduce the impact of the wind effect at such a height. It is possible the artists that have depicted the Tower of Babel in a spiral form are correct. With the whole world in one location working together and with the longer life spans to gain knowledge and experience to accomplish this structure, our modern architectural technology may be finally as advanced as they were.
However, ziggurats could be a viable option. In fact, similar structures exist around the world built by cultures that are so far separated from each other that only by retaining this similar history could they carry the familiar architectural style. In the Middle East, some 30 of such structures are known with names that bare resemblance to that which Scripture expresses: “a tower, whose top may reach unto heaven” (Genesis 11:4). A list of such names indicates the common thought:3)John H. Walton, “Is there archaeological evidence of the Tower of Babel?” reprinted by permission from Bulletin for Biblical Research 5 [1995]: 155-75. List compiled H.C. Rawlinson, H.C. 1861 The Cuneiform Inscriptions of Western Asia, v. 2. London: R.E. Bowler: 50: 1-23 a, b; accessed at http://christiananswers.net/q-abr/abr-a021.html

Some skeptics have argued that the Hebrew word for Tower מִגְדָּל could not be an accurate description of a ziggurat. Henry Morris III writes, “The Hebrew word migdal is used 50 times in the Old Testament to describe everything from a castle for royalty to a guardhouse in the middle of a vineyard. Often it signifies some sort of military construction that was designed for defensive protection of a city.”5)Henry Morris III, The Book of Beginnings: A Practical Guide to Understanding and Teach Genesis, Vol. 2, Institute for Creation Research (Dallas TX, 2013) p. 134 Obviously there is a wide variation of use for the word.

The frequent objection that the Hebrew term migdal is used primarily in military contexts or as a watch tower, but never used of a ziggurat, is easily addressed on three fronts.
We do not expect to see the term migdal used of ziggurats [stepped pyramids] in Hebrew because the Israelites did not have ziggurats.
We do not expect the Israelites to have a ready term for ziggurats because ziggurats were not a part of the Israelite culture.
Given the absence of a term in Hebrew, we would expect them to either borrow the word if they had to talk about them, use a suitable existing term, or devise a word. To call the ziggurat a tower is not inaccurate, and as a matter of fact, the term they used is derived from the Hebrew term gdl (to be large), which is somewhat parallel to the etymological root of the Akkadian word, ziqqurat (zaqaru, to be high). Despite the fact then that the Hebrew term is used primarily in military senses or as watch towers, the context here and the known background of the narrative prevent us from being limited to that semantic range. A possible nonmilitary function of a mgd may occur in Ugaritic as a place of sacrifice.6)John H. Walton, “Is there archaeological evidence for the Tower of Babel?” Bulletin for Biblical Research 5 [1995]: 155-75; http://christiananswers.net/q-abr/abr-a021.html