As archaeologists continue to dig deeper they have repeatedly dug up evidence that confirms the Bible. In a previous article we had documented “Evidence for Joseph in Egypt”1)see Heath Henning, “Evidence for Joseph in Egypt,” September 2, 2016; https://truthwatchers.com/evidence-joseph-egypt/ and since then there has been more evidence piling up from Egypt further substantiating the biblical account.

Many secular archaeologists have overlooked this evidence as they have focused on an erroneous interpretation of history, placing the events of the Joseph account at the wrong time. Charles Aling explained, “If the Biblical numbers are taken literally and at face value, the probable kings during the enslavement and subsequent rise to power of Joseph would have been Sesostris II (1897-1878 BC) and Sesostris III (1878-1843 BC). This argument than rests on how one interprets 1 Kings 6:1, a verse which dates the Exodus 480 years before the fourth [year] of Solomon, ca. 966.”2)Charles F. Aling, “The Historicity of the Joseph Story,” Bible and Spade, Vol 9:1 (winter 1996), p. 18 Though we will leave the argument for the dating problem for a later post, here are a few reasons the later date for Joseph cannot be accurate.

Archaeology also supports this earlier date. “Egyptian tomb painting depicting a caravan of Asiatics, very much like Jacob and his family, entering Egypt in the sixth year of Sesostris II.”3)Charles F. Aling, “The Historicity of the Joseph Story,” Bible and Spade, Vol 9:1 (winter 1996), p. 20-21

Timothy Berry chronographs, “When seventeen-years-old Joseph entered Egypt in 1899, Egypt was still in its Twelfth Dynasty and Pharaoh Amenemhat II (1929-1895 BC) was in his final years. We do not know how many years Joseph spent in Potiphar’s house, but we know that he was in prison for over two years (Gen. 41:1) and that when he finally stood before Pharaoh (perhaps Sesostris II) as an interpreter of dreams he was thirty years of age ([Gen.] 41:46).”4)Timothy W. Berry, From Eden to Patmos: An Overview of Biblical History, Livewithamission.com (2015), p. 27

Mainstream archaeologists would say that if the Exodus ever happened, it happened at the time of Rameses, because of the biblical text that said the Israelites were building the city of Rameses. Yet when people understood Rameses lived around 1250 B.C., they didn’t find evidence for this type of story in that time period.

But other archaeologists said to look deeper… Beneath the city of Rameses, was another city, much older, called Avaris. And that city was filled with Semitic people. It started very small, just as the Bible says, and over time it grew into one of the largest cities of that time. And that is where we find, I think, the early Israelites. That’s the pattern that matches the story of the Bible. It’s not at the time of Rameses, but it’s at the location of Rameses.5)Interview with Timothy Mahoney by Drew Zahn, “Statue of Bible’s Joseph discovered? New film challenges archaeology’s claim there’s ‘no evidence’ of Exodus,” WND, 1/17/2015; http://www.wnd.com/2015/01/statue-of-bibles-joseph-discovered/#uV3UFPMMYrlGHkZw.99 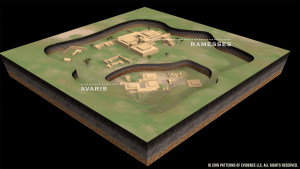 Manetho adds also, that “this priest sent to Jerusalem to invite that people to come to his assistance, and promised to give them Avaris; for that it had belonged to the forefathers of those that were coming from Jerusalem, and that when they were come, they made a war immediately against the king, and got possession of all Egypt.”8)Josephus, Against Apion, Book 1, para. 28; in The Complete Works of Josephus, (Tran. William Whiston) Kregel Publications (Grand Rapids, MI: 1981), p. 619

As the archaeologists have dug beyond the city of Ramses they have discovered this city Avaris. Manfred Bietak leading this excavation denies that it is the city of the Bible even though the name Avaris is connected to the Jewish settlement by the ancient historians as quoted above. Simcha Jacobovici discussed what the meaning of the name may be:

Prof Manfred Bietak has been digging at Tell el-Dab’a in Egypt for over 40 years. He has identified it as “Avaris”, the ancient Hyksos capital. Avaris is smack dab in the middle of the area the Bible calls “Goshen” i.e., the area that the Israelites lived in prior to the Exodus. The word “Avaris” means nothing in Egyptian. But, in the Torah, Joseph is repeatedly called a “Hebrew”; “Ivri” in the Hebrew language. He is also repeatedly and curiously called “Ha Ish”; “The Man”. In other words, the word “Avaris” may very well be related to Joseph, the “Ish Ivri”, or the “Hebrew Man” (Genesis 39:14). All this is lost in translation when Joseph is simply called a “Hebrew”. Put differently, the so-called Hyksos capital seems to be named after Joseph the “Ish Ivri” i.e., Avar-Ish.9)Simcha Jacobovici, “Statue of Biblical Joseph Found: Story Covered Up!,” Torah Archeology, February 18, 2014; http://www.simchajtv.com/statue-of-biblical-joseph-found-story-covered-up/

Gary Byers relates the excavations of Avaris. “Recent excavations in the eastern Nile delta may have actually identified the location of Joseph’s residence in retirement and even his tomb. At a site known as Tell el-Daba today, The Rameses of the Old Testament, extensive excavations have been carried out under the director of Manfred Bietak of the Austrian Archaeological Institute, Cairo, since 1966… The site has evidence for Asiatic as early as the mid-12 Dynasty (mid-19th century BC), the general period when Jacob enter Egypt. It was an unfortified rural settlement, although numerous enclosure walls probably kept animals.”14)Gary A. Byers, “Israel in Egypt,” Bible and Spade, Vol. 18:1 (winter 2005), p. 4 Interestingly, it was because Jacob and his family were shepherds, that when they was introduced to the Pharaoh, they were given the land of Goshen to stay (Genesis 46:33-34; 47:1-4). “And it shall come to pass, when Pharaoh shall call you, and shall say, What is your occupation? that ye shall say, Thy servants’ trade hath been about cattle from our youth even until now, both we, and also our fathers: that ye may dwell in the land of Goshen; for every shepherd is an abomination unto the Egyptians.” Manethos also repeatedly mentions walls but made the suggestion that they were fortified walls for the rebellious army led by Moses. 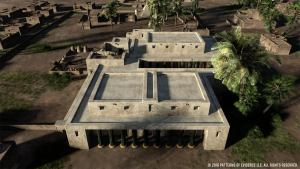 “But what is most interesting about this find is the cemetery located in the palace garden, and particularly one of the tombs in it. All of the other graves (there are approximately 12 altogether) seem to date to a slightly later period, perhaps the early years of Dynasty 13, and were on the basis of their orientation, definitely not part of the original palace-garden complex. But the largest and most impressive tomb of the lot, consisting of a single brick chamber with a small chapel in front of it, was oriented to the structures of stratum E (early-to-middle 12th Dynasty) (Bietak 1990: 61).”15)Charles F. Aling, “The Historicity of the Joseph Story,” Bible and Spade, Vol 9:1 (winter 1996), p. 20-21 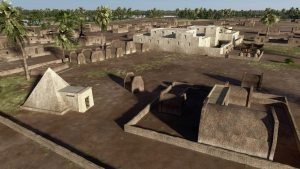 The largest tomb shaped as a pyramid has drawn significant attention.

“Between 1986 and 1988, Prof. Bietak found the remains of a monumental statue that seems to have belonged to a non-Egyptian ruler of Avaris. Although only fragments remain, the archeologists estimate the original size of the seated figure to be 2 meters high and 1.5 meters in depth i.e., about one and a half times life size. Over the statue’s right shoulder you can still see his “throw stick” i.e., the symbol of his rule. On the back – remarkably, as with the Biblical Joseph – you can still see evidence that this ruler was wearing a striped garment, made up of at least three colors: black, red and white. He was found in a tomb.”16)Simcha Jacobovici, “Statue of Biblical Joseph Found: Story Covered Up!,” Torah Archeology, February 18, 2014; http://www.simchajtv.com/statue-of-biblical-joseph-found-story-covered-up/

The Babylonian Talmud records the debates of rabbis over where Joseph was buried. “Rabbi Natan says: Joseph was buried in the crypt [kabbarnit] of kings.”17)(Babylonian Talmud, Sotah 13a; https://www.sefaria.org/Sotah.13a.16?lang=bi&with=all&lang2=en The Bible mentions Joseph had a special coat of many colors. “Now Israel loved Joseph more than all his children, because he was the son of his old age: and he made him a coat of many colours” (Genesis 37:3). This statue discovered in the pyramid shaped tomb has been reconstructed with computer graphics to reveal what it once looked like. 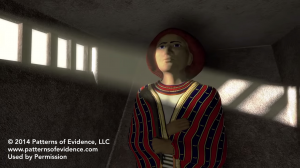 A cemetery with artifacts that connected it to the houses was also excavated in the open space to the southwest. One of the tombs was monumental in construction and totally unique in finds. Inside were found stone fragments of a colossal statute of a man who was clearly Asiatic, based on the yellow painted skin, the red-painted mushroom-shaped hairstyle and throwstick on his right shoulder (the hieroglyph for foreigner)…

While the other tombs nearby had intact skeletons, the only finds in the monumental tomb were fragments of an inscribed limestone sarcophagus and a few bone fragments. The body was gone!18)Gary A. Byers, “Israel in Egypt,” Bible and Spade, Vol. 18:1 (winter 2005), p. 4

This also concurs with the Bible’s account. “And Joseph said unto his brethren, I die: and God will surely visit you, and bring you out of this land unto the land which he sware to Abraham, to Isaac, and to Jacob. And Joseph took an oath of the children of Israel, saying, God will surely visit you, and ye shall carry up my bones from hence. So Joseph died, being an hundred and ten years old: and they embalmed him, and he was put in a coffin in Egypt” (Genesis 50:24-26). This explains why the most important tomb in the yard of the palace is the only one missing a skeleton. The Babylonian Talmud states, “It states further in the mishna: Who, to us, had a greater burial than Joseph, as it was none other than Moses who involved himself in transporting his coffin.”19)Babylonian Talmud, Sotah 13a; https://www.sefaria.org/Sotah.13a.13?lang=bi&with=all&lang2=en Scripture tells us that Moses took the bones of Joseph (Exodus 13:11) but he never entered the promise land so he could not have reburied the bones of Joseph. John Elder identifies where the missing skeleton is. “In the last verses of Genesis it is told how Joseph adjured his relatives to take his bones back to Canaan whenever God should restore them to their original home, and in Joshua 24:32 it is told how his body was indeed brought to Palestine and buried at Shechem. For centuries there was a tomb at Shechem reverenced as the tomb of Joseph. A few years ago the tomb was opened. It was found to contain a body mummified according to the Egyptian custom, and in the tomb, among other things, was a sword of the kind worn by Egyptian officials.”20)John Elder, Prophets, Idols and Diggers, New York, Bob Merrill Co., 1960, p. 54

For more on this evidence see Timothy Mahoney excellent documentary “Patterns of Evidence” (2014).

Tower of Babel (Part 4) Where was the Tower?

standeth       The Hebrew word translated “standeth” עָמָ֑ד is a Qal perfect from the root meaning “to stand,”((Gesenius’ Hebrew and Chaldean Lexicon of the Old...

Was Sir Isaac Newton an Arian?

Is Distant Star Light Evidence for Millions of Years?

Education: A Brief History and Cause of Decadency (Part 2)